Somebody once said that "farmin' is about 10% hard work, and 90% fixin' something what has got busted".

Running a pottery studio is pretty much like farming in that respect.

I've been struggling with my large kiln since the beginning of December. You can guess how good that timing was... several orders I had promised for then were late, and several in fact never did get done. Great marketing move... not.

At first I thought it had be one of the elements. I had replaced them the month before, after which I had three or four successful firings, but you never know. A careful visual check did not reveal any obvious bads.  Nothing broken, no coils hanging out into kiln space. No error message. Just the firing temperature, as reported on the little controller screen, bouncing around, up and down, and not seeming likely to ever reach cone 6.

Opened up the controller box. Peered closely at every connection. Nothing to see. So I replaced all the thermocouples.

Opened it up again. Hey, one of the element connectors looked black and gnarly. I figured that had to be the problem and felt encouraged. I knew what it was! I cleaned up the connector and tried to re-attach it but the 'tail' of the element had burned through and was now too short. There is no way of lengthening that. I tried, but of course the element promptly broke at the other end of the 'tail'.  Luckily, I had kept one of the elements I had removed earlier because it hadn't broken, so I re-installed that. I was so happy to have found the problem...

So I replaced the relays. I had noticed one of them was making an odd sound, not going 'click, clack' like I was used to, more like 'click, scritch'. No telling which one so I replaced them all.

Now I was getting frustrated, discouraged, depressed, not at all happy. Keep in mind that every trial meant waiting for the kiln to heat (or not), waiting for it to cool, then busting knuckles on anything I tried to do. Working on kilns is not done on a work bench at working height, no, you do it with your head down by your ankles, trying to look up into a maze of wires. In the semi-dark inside the cover box, wearing bifocals. Another great quote came to mind while I applied bandaids: 'working on one of these kilns is like working on a pre-war diesel engine'. I've never worked on a diesel and I hope I never have to, but I can imagine.

So yesterday I opened the box up again and carefully went over everything from the top down to the bottom. This time I carefully tugged on every wire, tapped every connector... and lo and behold, one of the wires on one of the thermocouple attachments was loose. Completely dis-connected. A tiny tiny wire!

Got it around it's little post and tightened up, and guess what - kiln fired properly for the first time in over a month! An empty kiln with basically new elements should fire like a rocket, and it did! Temp climbed over 400F in the first hour. I set it to fire to cone 08 and it did, no problems.

Why no error message, I wonder?

It is with great excitement and enthusiasm and various other expressions of astonishment, that we announce that the (drum roll, please) Official 2016 SmartAss Calendar is (finally) ready! 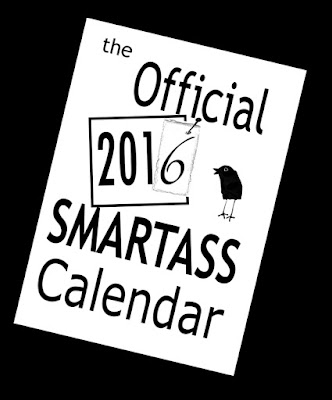 SmartAss having reached the age of Wisdom and Maturity (3 years), she has taken the theme of Suggestions For Right-Living and leaves the reader much Wisdom on which to meditate during the coming months.

This Annual Calendar, besides enjoying many Capital Letters, is a unique, hand-made, original, limited edition Art Work only available to a select few, that is, anybody who cares to drop me a comment and pretend that they would like one.

SmartAss sends Happy 2016 Greetings to you all!

ps. anybody who wants one will have to send me their mailing address...