This year, for the first time in a decade, I signed up to do the Carp Farmers' Market Easter Market. It's next Saturday, from 8am to, I think, 2pm. I get only a 6-foot table so I won't be able to show much of my pottery, but I'm hoping people will like my Bird stuff.

I'm also planning to have a few small pots with forced Forsythia and Pussywillows and maybe some moss, as little gift-y flower arrangements. This is kind of against the rules so I'm hoping nobody will object - I don't want to get busted! We're not supposed to sell anything that hasn't been juried, nor are we allowed to sell more than one type of product. I do think a few flowering stems in a pottery piece should be considered 'accessories', but I have to agree it is debatable.

Funny week. The latest firing of Red Fox pieces turned out really well - the soup/cereal bowls show this glaze at it's best - but I'm disappointed in the latest Bird bowls as the edges are all green-turquoise instead of some being blue-turquoise. My own fault for not washing out the spongie I was using well enough. It looked a bit greenish but the two colours, when raw, are so alike it is hard to tell. OK, new batch of Bird noodle bowls comin' up, and they'll have blue edges, dagnabit.

Super Helper tried brushing glaze onto a bonsai pot. It had a little crack in the corner, so it was an expendable crew member anyway and I thought it worthwhile to give it a try. These pots are somewhat large, and it takes a lot of glaze to dip one. If we could get by with a small amount of glaze it would really help. I already have quite enough small pails of different glazes..... Well. It took a long time to do (I knew it would) and it LOOKS AWFUL! So much for that idea.

Then, having already far too many miscellaneous glazes kicking around, we went ahead and mixed up a few more. I wanted some different greens to do a series of pressed leaves we made and bisqued last fall. Of the five colours we tested, all but one are great (the darkest one isn't Spring-ish enough) and I decided to do some leaves in each. SH mixed up useable quantities of two of them. I went to dip leaves in one and found it was really settling, so I asked her to mix some epsom salts and add it. It worked somewhat too well and now we have about a gallon of glaze the consistency of philadelphia cream cheese. Hmmmm. Adding sodium silicate did not help. In fact, it created a nasty brown puddle on top of the cheese..... every time I stir it in the glaze gets stiffer. OK, more landfill and mix it again, Sam.

I finally got that canisters set done, that is, I finally got four jars with lids that fit. It took more than 20 lids to get four that work. I hate that style of lid - domes that fit on top of the jar with the flange inside because you simple have to glaze the rim of the jar and then the jar warps because it has the added word on one side but the lid sits flat on the kiln shelf and doesn't shrink the same amount and your chances of getting the lid to fit the jar are about as good as brushing a glaze on evenly. That is, it can be done, but is it worth the effort? Nope. Here is a picture of the darned thing: 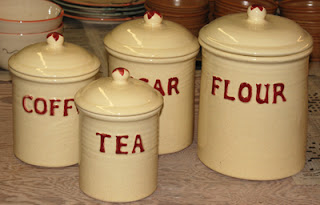 You can't have a good week every week.
Posted by Lis at 11:49 AM No comments: