A blog I follow (Hortus 2) had a post about a new fern nursery in Nova Scotia. Naturally, I immediately became totally obsessed with all things Fern...

The first thing I did was to consult my handy-dandy Smartass calender and pick a day for my annual Fern Day. I picked June 28, if you want to know. You can find out more about Fern Day on my other blog, but basically it's a garden tour and tea and some fern items for sale, including plants. I do have almost all the native Ottawa Valley ferns... brag brag.

Then I started thinking how I could plan to make some fern-decorated pottery. I did make a few pieces a while back, but never had time to do more. Maybe this year! Here is one I liked: 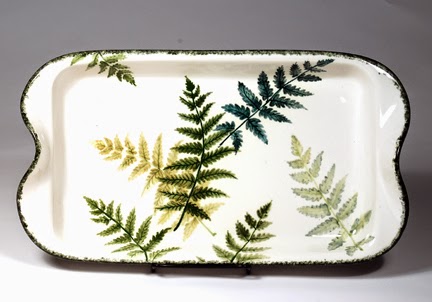 Hmmm. Maybe a vase would be good too. Or tiles, tiles are always good. Nobody buys them, but they are a dream to paint on.

Then, of course, I started thinking about the garden and thinking about visiting some of my favourite nature areas and going off photographing and getting more ferns and before I knew it my mind was off in 17 different directions and I had to stop and have a nap instead.

The Valentine Tree, A Saga In One Parts

"I know," she said, slogging through the snow to the Studio,  "I'll make a Valentine Tree. It'll be fun, totally cute, and I'll take a picture of it and put it on my blog, and people will see it and want one and buy my pottery and I'll get rich and famous." (An aside: she's always wanted to be rich and famous, but is finally approaching the age where she might have to accept that this is not going to happen. Still.)

The daydream was interrupted, briefly, by actual Work, but eventually she made a slab, cut out hearts, stamped interesting designs into them... then stepped back and realized they were all too big and started over... and eventually she had some hearts.

Then she sprayed them with a High Gloss Finish No Fumes spray. About 20 times until the can was empty and the hearts were well stuck to the newspaper and the studio reeked of fumes.

Then she put threads on to hang them by and added some beads that were wandering around the Studio. It was at this point that she remembered how much she loathed macrame. 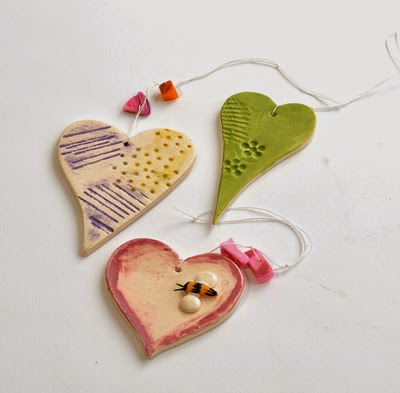 Not wanting to sacrifice another evergreen (and not wanting to wade around in the deep snow but that's another story) she cut a couple of branches, jammed them into a vase and hung the hearts on them. The vase had a slight tendency to tip over but by being very cautious and lightning-quick on the rescue, she managed to get them all hung. They pointed in every direction and swayed in the slightest breeze. All the best Studios have slight breezes, usually caused by an ill-fitting front door that freezes up in the winter, so they swayed a fair bit.

She then tried to get a good picture of the Valentine Tree. After several (well, maybe quite a few) hours, she went in for lunch and told her Significant Other that trying to photograph the Valentine Tree (except that that is not what she called it at that point) was going to drive her nuts. He said it was too late.

Eventually, with the assistance of a stray visitor, an old photo flood duct taped to an old pole, a rare gleam of actual sunlight through the window and Photoshop, she got a picture of the Valentine Tree. 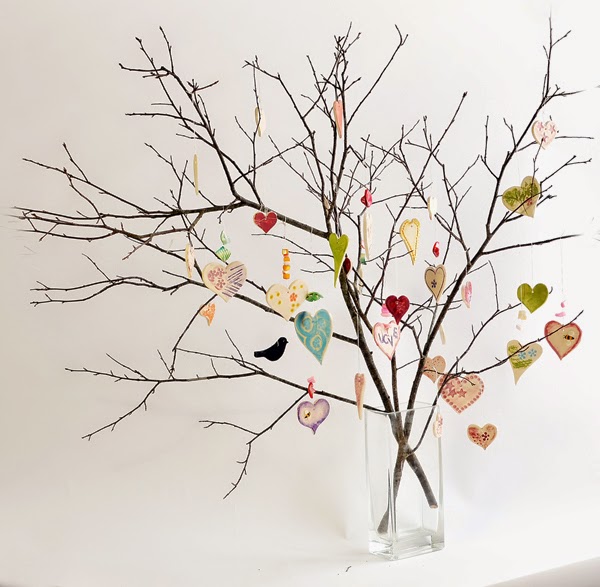 Rich and famous may have to wait.

Happy Valentine's Day!
Posted by Lis at 5:31 PM No comments:

Sometimes a potter needs a break. Much as I love making mugs and bowls and plates, sometimes I want to play a little.

This week I indulged myself by making some Air Plant holders. 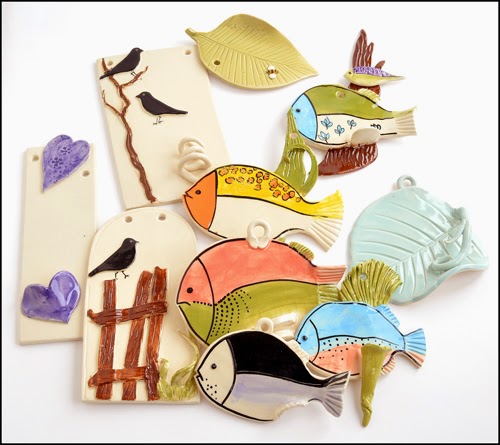 They are just slabs, cut into shapes I like, painted with underglazes and dipped in a clear glaze. Fired to cone 6. They are between 4" and 10" tall and have either holes for a string or a small loop for hanging.

Air plants (Tillandsias, do the Google) need a solid something, such as wood or rock, to be stuck to, and then a good bright but not hot window. You have to spritz them with tap or rain water a couple of times a week and give them some weak fertilizer once a month. Dipping them in a bucket is good too. In other words, you need a substrate that is waterproof and scrub-able. Pottery is perfect!

Here are a few pretend-planted: 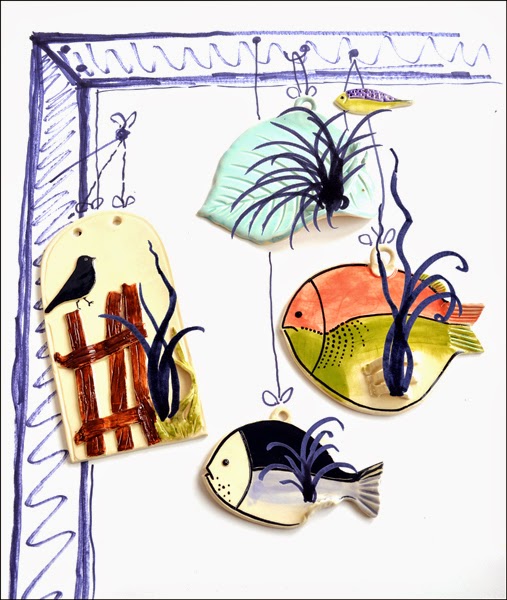 Near the bottom of each one I made a little platform or loop for the plants to be tucked into. I glued  mine on with E6000, the magic glue but you can wire or tie them on too if you prefer.

There is more info on my Garden blog. Tillandsias are quite nifty little plants, and many of the florists and nurseries around here have some. I got mine at The Hive in Carp.