Well, like all events do, it's come and it's gone. I had a pleasant day sitting in my tent on a fairly cool sunny day, but I can't say it was a great success as far as selling my pots goes. I did make some sales, but wouldn't you know it, really only mugs and flat dishes. All my cute 'herbish' things got ignored.

A couple of things I learned (or re-learned).

First, my booth layout stinks. A 10' x 10' tent is not the same thing as a 10' x 10' space inside a building. By the time you subtract the edges which suffer from passers-by bumping into them and adjust for the big low spot in that corner.... hard to fit in two tables, a chair, a small wrapping table, an easel with tiles and make it look good. Next year I plan to have narrow tables that can act a bit as walls and block off clumsy pedestrians, small children and yappy dogs. I also intend to be firm with my booth neighbours - this time one of them insisted there had to be a walkway between us and I didn't realize until too late that he wanted this so he could set his booth up so people could look at his stuff from the side as well as the front, and I had his customers in my booth most of the day.

Second, the idea of hanging the herb tiles on a cloth-covered styrofoam board on an easel was a failure. Turns out people don't lift tiles down, they just yank. Several times the whole board came down. Broke three tiles. Got tired of saying 'Oh, don't worry, not your fault' with slightly gritted teeth and finally just stood the board on the ground. Didn't sell many tiles anyway, but I don't think it was because of the display. On the whole, people didn't look inside the booth at all, they just looked at the one table at the front. They glanced at the other stuff but didn't check it out. With the sun so bright outside, the interior of the tent was far too dark. Not sure what I can do about that but I'm day-dreaming about battery-powered lights, solar panel-powered lights, huge silver reflectors, maybe even transparent (translucent?) canopy material.

And, third, BIG third, next time I'm bringing a picnic cooler with lunch, snacks and cold drinks. I don't like greasy sausages or b-b-q'ed exotic meats. And they ran out of drinks other than pink lemonade with no sugar in it around one o'clock. I had a turnover which was supposed to have chicken inside, turned out to be tofu curry. Hmmm. Edible, but not lunch. I was starving again about 10 minutes later. And being alone, I couldn't go roaming around foraging so just toughed it out. The guy next to me, the one whose customers kept stepping back into my wrapping table, kept eating ice cream. He must have spent a fortune on it! His little grandson spent the whole day, as near as I can figure, alternating playing some game on his computer thingie and fetching gelato.

Never mind. Lots of good stock left for the Market booth and Crabapple Gallery. And like I said, it was a pleasant day. Lots of people I know came and stopped to chat, I did make some money, and I learned how to be better prepared next year.
Posted by Lis at 10:53 AM No comments:

Yes, the truck is loaded, the last tablecloth is in the dryer, the biz cards (bookmarks, really) are printed.... I think I'm ready for Herbfest.

I do have some actual pottery, too: 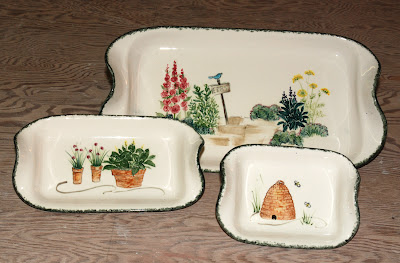 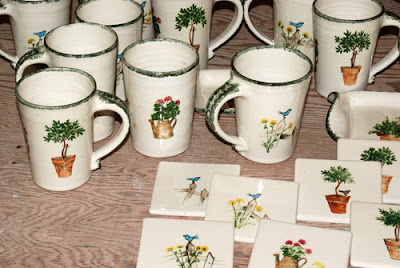 Lots of fun stuff, all with a 'herb' theme. I'm looking forward to a fun day tomorrow - even if the crowds don't snap up all my nifty herb-y stuff, I'll still enjoy being outside, eating some interesting food (very creative chefs at Herbfest!), visiting with friends, taking a short stroll through the gardens, and just generally joining in the celebration of all things herbal!
Posted by Lis at 8:39 PM No comments:

Another Fun Thing for Herbfest

A few of the picture tiles I've made with herb themes have come out of the kiln. There are more in the kiln now, which is 'on', even though the temperature today is over 32C. Oy. And tomorrow is supposed to be even hotter and the whole weekend is going to be over 30C. So Herbfest will be a hot one, not to mention that my booth at the Market will be stifling on Saturday. Good thing potters are tough!

These tiles are very simple. I roll a thin (1/4" or less) slab, then basically rip them into the sizes and shapes I want. I run a rounded point (like a pencil or a thick needle tool) along the line, then gently lift the clay and rip along the line. Sounds odd, but it works easily. Then I just let them dry, bisque them, dip them in my glaze and paint the designs on top. Then fire them to cone6, just like my tableware. 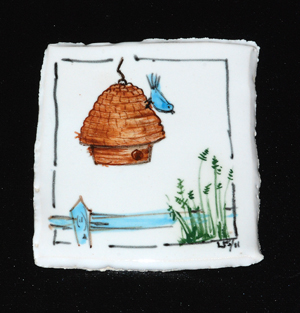 This one is only about 3 inches 'square'. I like them weird sizes as it makes every one of them a composition challenge! Tile adhesive sticks them to pre-stretched canvas panels (available at my friendly local art supply store). There are a few different kinds of tile adhesive. I use the one for walls and it works great. In a pinch, the tile can be soaked off, although it ruins the canvas panel. The only one I have ever had back because the tile came off was from a store owner who hung one right in the drip from his roof. Here are a few of them: 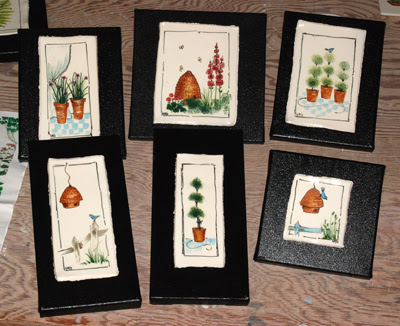 These panels are painted black, but of course you can paint them any colour. One of these days, somebody is going to ask for one in, say, fire-engine red.... let's hope I'm in a good calm mood that day.

Another simple thing for my booth at Herbfest is planters suitable for growing a few herbs on a step or balcony. Not a very exciting project, but the glaze is nice. This is a variation on the Variegated Slate Blue in 'Mastering Cone 6 Glazes' by Ron Roy and John Britt.. I love the colour, and would like to make tableware in it, but I'd have to get it tested for food safety. It has copper in it and, being at least satin-matte, is probably not a very hard glaze. But I love the way it sparkles and shows depth where it runs. It was great on my bonsai pots earlier, too. 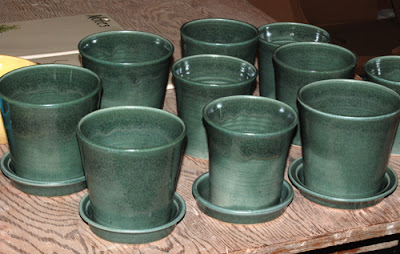 Not a great picture, sorry. Too hot in there to work at photography!
Posted by Lis at 4:44 PM No comments:

One of the more enjoyable craft sales around is Midsummer Herbfest. This has been held every July for the last 15 years at The Herb Garden in Almonte, Ontario. As far as I know, it has never rained (OK, once there was a sudden thunderstorm towards the end of the day), which must be some kind of record! I didn't do the show for a couple of years because I just had too much going on, but I'm back this year.

So we've been very busy in the Studio making some fun stuff. 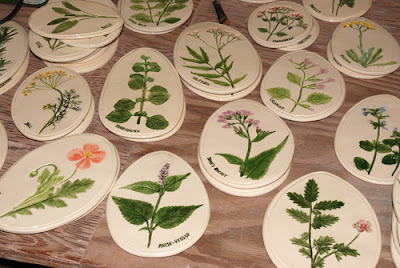 I painted a lot of herb tiles. It's sort of paint-by-numbers! I made plaster molds of various herbs years ago - pressed each herb into a soft clay tile, then made a plaster mold of it. Now I can press clay into the molds and make tiles in the winter. I never have time to make them in the summer and there are no fresh herbs growing right outside the Studio door in the winter so this is a pretty cool solution. 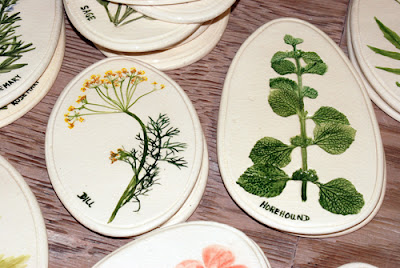 Once bisque-fired, it is easy to paint the herbs. All I need to do is fill in the depressions! Like I said, paint by numbers. Then they get a coat or two of low-fire clear glaze, and I fire them to cone 06. The clay is a porcelain, meant for cone 6, so they crackle nicely.  It's kind of fun, actually. No strain on the brain, and they always sell very well. 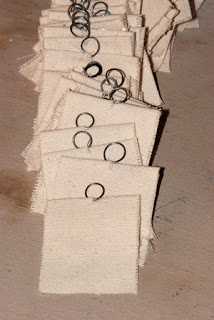 Super Helper made a (large) stack of hangers: cut the strips of painters' canvas, cut and bent the wires, then glued the wires into the canvas.


We'll glue the hangers to the backs of the tiles next week.


One thing I haven't figured out yet is how to display them at the show. They take a lot of table space if you just lay them out, and they look better hanging up, but what can I arrange to hang them on? I have a 10 x 10 space under a tent..... no walls .... hmmmmm.

We're making some other fun things as well - I'll post more pictures as things get finished.

By the by, if anyone reading this feels like stealing this idea, go right ahead! There are lots of other ways of using the basic idea of pressing plants into clay and plenty of potters doing it, but maybe you can come up with a unique product. If you do, send me some pictures!