There is an enormous amount of pressure on craftspeople these days to advertise their work, and a large part of that involves having good photos of their work. Any show or sale you want to apply to asks for images, stores want posters with photos to put near your work, and a veritable chorus of marketing advice tells you over and over that you must have good pictures, you must do social media, you must... Trouble is, if you ignore the chorus, you risk being over-shadowed by all the ones who don't.

Here is what I went through yesterday, just trying to get one decent image for my Facebook page.

First, I decided to include a few pieces, not just one, and to choose my recent Bird pieces. Then I got the idea that Bird would look good among some twigs... which had to be black... so I searched the woods for suitable twigs, cut them, cleaned them up and painted them black. Turns out that frozen twigs are hard to paint black, they thaw out and the paint doesn't dry and doesn't stick. But eventually I had some.

Then I moved all the plants that have been in my Studio window all winter. It's my only real light source. I've got some photo floods and a flash, but none of them really work as well as the window. Mind you, I can only use the window for a few hours in the afternoon, after the sun moves to the front of the Studio and before it shines directly into the window. The plants didn't complain, but I could sense disapproval.

Then I put up the white background paper. Not quite enough room for it but by hanging one end of the roll at the window and supporting the other end on a tall tripod, it works.

I arranged the pots and twigs. Here is what I got: 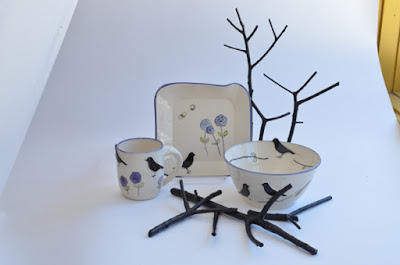 Definitely a job for Photoshop. First, I cropped. Then I adjusted the colour balance, then lightened and increased the contrast and the overall colour saturation. 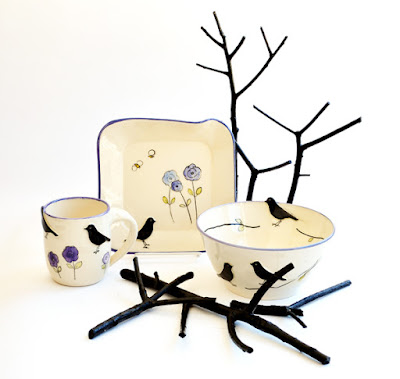 Then I started a new file and gave it a graduated pinkish/mauve background. Moved my photo in, then added my logo, then some words. It was still pretty dull so I added some loose birds. Now it wasn't too bad, but I didn't like the way the pottery disappeared under all the other gumpf. So I went back and re-cropped the pots photo to concentrate the attention on the pots a bit better. While I was at it I added a fine black line around the image.

Of course I moved everything around about six times and re-sized things at least as often, but eventually I figured it would do. Here is the final image, ready for Facebook and Google+: 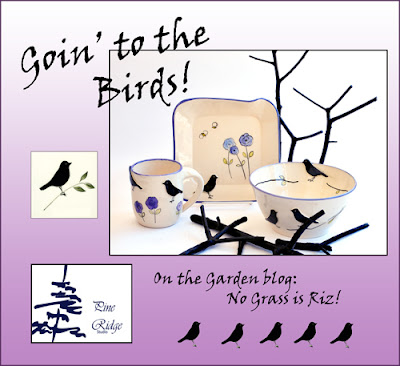 Then of course I had to do the posts, write a covering 'comment' and post it. And I don't even do Twitter, Instagram or any of the other social media sites. What I did do took pretty much all afternoon and early evening, maybe a total of 4-5 hours.