Yes, Winter is back! It's snowing like the dickens out there: 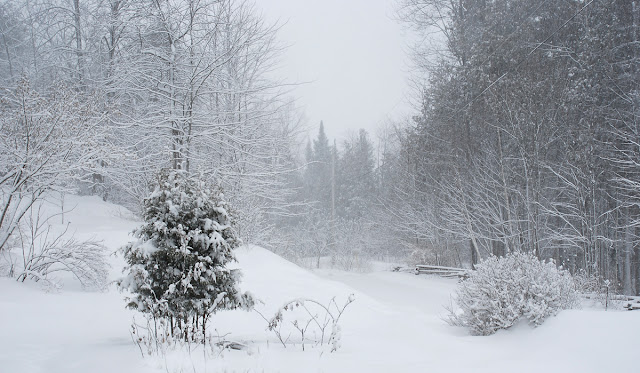 As you can see, driving will be a challenge for a day or two!

Which is sort of too bad, as the steering on truck has just been fixed and it's 'right' again and I'm itching to go someplace.....

But the snow does calm me down and get my mind back into the Studio. All this past week it has been so Spring-like my head was buzzing with thoughts of seeds, garden projects, trail work ideas, everything BUT work. And there's plenty of that in hand, with the Maple Run Studio Tour fast approaching, a new order to start on, the Easter Market not so far off....

And now that the Raven stuff is done, I'm full of ideas about pots decorated with spring wildflowers, and, at the same time, plain blue pots in that fantastic new blue glaze that I'm ready to test on real pots. The Ravens turned out pretty well, I think: 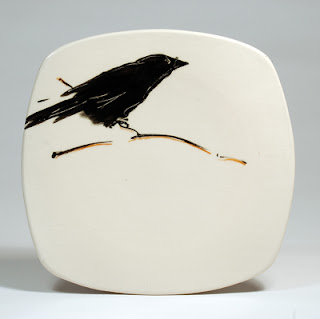 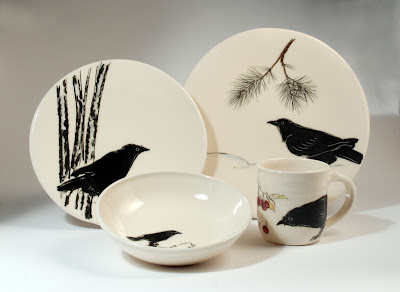 The big guy has a bit of a skittish look to him, but I like his fuzzy tail feathers.

There were two ravens in the big pine behind the house the other day. They sat there and watched me put the garbage bags in the truck, commenting hoarsely as ravens will, and then I guess they followed me to the road as I had quite a mess to clean up later.

Wildflowers are much better behaved!
Posted by Lis at 4:38 PM No comments:

I've just finished Swiffering my ceiling. (No, that's not a product endorsement, although if the Swiffer people would care to call, I do have a Paypal account.....). It's just that that is the brand my store happened to have, so that is what I bought. I got a box of those duster things because I thought they would be handy for getting the dust off my computer keyboard, and they are. For about a minute each day, my keyboard is dustless.

But today I used the whole box on my ceiling. What started it was the smoke alarm going off. Naturally I raced around the house (not a long run) and made sure nothing was on fire, not even the toaster oven, but then I had to get the alarm down and turn it off. As soon as I brought it down, it did stop. Hmmm. Then I put it back and a minute later, scrrrreeeeeeeeee...... Took it down, it stopped. Put it back, scccrrreeeeeeeee.

Puzzled, I remembered years ago a smoke alarm going off because a small spider had set up housekeeping in the sensor.

Looking more carefully at the alarm and it's seat on the ceiling, I noticed strings of spider-web-like dust hanging down. Sure enough, one kept wafting towards the alarm and setting it off. So that solved that problem, but now I knew my ceiling was an upside-down dust-web farm, yikes. Now, the ceilings in this house are that stipply stuff, so any time you so much as touch them, bits of white stucco fall on your head. And you can't exactly run a dustcloth over them. Aha, I thought, maybe those Swiffer fluffs will work. I got an old mop handle out (kept because I'm too cheap to throw anything potentially useful away and it was a perfectly good handle and you never know when you might need 6 or 7 handles for something), used some rubber bands to attach two of the fluff sheets, and went at it. The fluff sheets grabbed onto the dust webs as soon as they got close so I didn't have to actually touch them, or the ceiling.

It took over an hour but now I have a clean ceiling!

And the smoke alarm has shut up.
Posted by Lis at 10:57 AM No comments:

As I said in my last post, I'm trying a slightly different approach to planning my work. Instead of making a large batch of, say, mugs, and then a batch of teapots and so on, I decided to make batches by pattern. So earlier in January, as you saw, I made stuff for Blackbird in Almonte, and now I've finished some Pine and Loon pattern things for Three Yellow Tulips in Pakenham. 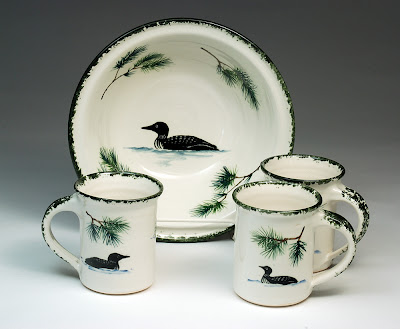 Three Yellow Tulips is a nifty  little Art and gifts shoppe in Pakenham, a village known for its Five-span Bridge, a historic feat of engineering spanning the Mighty Mississip. OK, spanning the Ontario Mississippi river.

Pakenham is also on the edge of the Calabogie/White Lake cottage area, so I am hoping a cottage-y pattern might appeal. And what is more cottage-y than loons?

Making black loons with white spots was a little tricky - the only way I could do it was to stencil the bird, then scratch through the black into the white glaze with a pin tool.

Now I'm working on Raven things. A very different kettle of fish, or should I say flock of birds? Each Raven is hand-painted and each one is different, so it becomes hard after a while to think of new poses and compositions. This is one way in which pottery is harder than painting. Painters only have to do one loon painting, the potter has to do one for each piece and if said potter is silly enough to be trying to make a living from tableware, there had better be many pieces.... anyway, the hardest thing about the Raven design is inventing it every time. I did spend some time studying the crows along the road the other day and realized that there are an infinite number of Raven poses. I just have to learn how to paint them. It's the gesture that matters, not the detail. Mind you, once the brush hits the greenware, the painter is committed, and the detail had better follow.

It's fun, and satisfying, but nerve-racking all the same! Pictures next post!