The first one relates to my efforts to take better photos of my pots. I wanted those wonderful shaded backgrounds, evenly lit pots, no glare spots.... surely not too much to ask? I see images like that all over the place so obviously other people know how to do it. I read books, studied the lighting diagrams, even purchased a so-called Light Tent.

Was I able to get good shots of my pots?

Finally I made a rough frame out of 1 x 2 lumber, hung 2 photoflood lights with reflectors from the ceiling, hung a sheet of black background paper from the back of the gizmo and did my best. Not awful, but not the smooth background I wanted. Tried it with white background paper..... now I didn't get the dark space I wanted. Grrrrr. After a whole afternoon's work I was ready to snarl and give up.

Woke up in the morning thinking,'what if I use grey background paper?'. So I tried that and it worked! Just look: 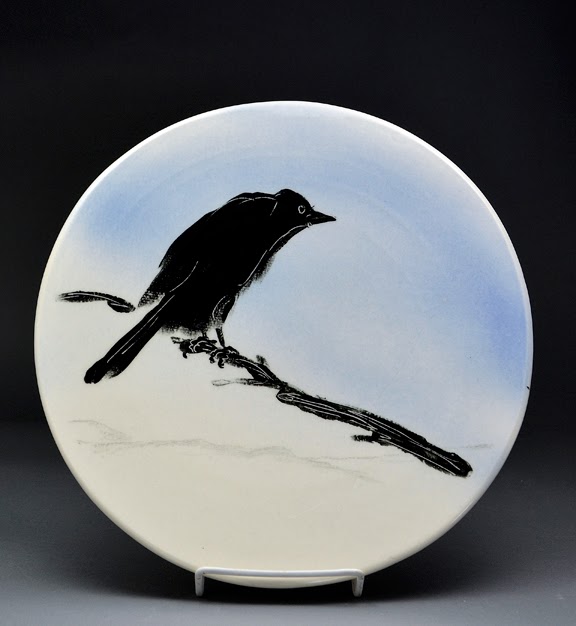 The second 'well, duh....' was even dumber. My kiln failed, big 'ER - 1' error code. Yikes. Panic. Of course, I had mugs to fire which the customer needs next week, plus all the pieces from last weekend's workshop waiting. So I let it cool, unloaded it and inspected the kiln's innards. The error code was described in the manual as meaning that the temperature wasn't climbing. The elements didn't look too bad - loops starting to fall down a bit, but nothing severe. I had already decided to replace them, just hadn't quite got around to ordering the new ones yet. So I phoned my supplier, she most helpfully got a set sent up for me and called me when they arrived. I rushed into town and got them, and got some new thermocouples at the same time. Figured new elements should have new thermocouples to give them the best chance to work properly.

Then I spent a nasty afternoon removing the old elements and installing the new ones. The way the inside of this kiln is designed, old elements simply do not come out without damaging the brick. I did my best, sometimes almost removing the old elements loop by loop, but I still crunched a lot of brick edges. After a while I got smarter and used a craft knife to shave a wee tiny bit off the edge of the upper bricks and that helped a lot.

Then I turned it on and tried it. Seemed to work. Got nearly to cone 01 and shut it off because I wanted to go to bed. In the morning I loaded the kiln with shelves and large witness cones on each shelf and programmed a cone 6 firing.

After I got through wanting to have a temper tantrum, I sheepishly called my supplier to ask about relays. Happily, she had some. I got them, put them in (easy), re-started the kiln. Success!

The reason I got the error ER - 1 but no elements were broken was simple - it was a relay problem.