Dots.... Onwards in the Quest

Well, I'm still working on the dots problem. For a day or two I actually thought that it might be due to over-firing as the shelf with the worst case of the dots was definitely over-fired, but then reality set in.

I fired another load of maiolica-type work and made sure to have witness cones on every shelf. This confirmed that the bottom of the kiln was over-firing. I debated switching the top and bottom thermocouples but in the end didn't and just went back to my old system of having a deep space on the bottom and shallower spaces higher up the kiln, and placing a kiln shelf right at the top. I also went back to leaving the top peep hole open. Don't ask me why this works, but for me it does. Maybe my kiln vent is just weird, but it worked before with the manual kiln and is working again now with this computer-controlled one. The original thermocouples gave a very even firing, but this second set clearly doesn't. So I at least learned that much. The firing was much more even.

But dots appeared on every shelf.

Then I sent an SOS out on Clayart, a list I belong to. This list (if you aren't on it, you should be) has some super helpful and knowledgeable people on it, and I got a number of responses. Some of the suggestions made were: could be the opacifier; fire the bisque higher or longer to be sure it is well cleared; re-screen the glaze; could be the clay; could be a change in glaze material; try another glaze; fire slower.

I tried re-screening the glaze first. Easiest thing to check! This had no real effect except that I did realize that the thickness of the glaze slurry had drifted and it needed more dilution. I mix large batches of this white glaze, keep it in a laundry tub for dipping large pieces, and just add to it whenever the level goes down too far. That doesn't mean it doesn't get screened except when being mixed, though. I periodically re-screen the whole batch. The frit (F3134) is somewhat soluble, and I think it gets used up differentially. So I sometimes add a titch of frit and that means re-screening and testing. Plus the glaze sometimes develops tiny granules. They dissolve when I touch them, but I figure they can't be good so when I see more than one or two on a glazed piece, I re-screen. But in fact this glaze had been standing more than usual lately, because I have been making stuff in a couple of plain colours in order to have lower-priced pieces to sell. So it made sense to try that first.

Unfortunately, as I said, that had no effect.

I couldn't really try a different opacifier. I have been using Superpax and it is not a new bag. Tin Oxide has lots of problems, not the least of which is that it is expensive. So I don't want to get into that. Plus the small amount I have has crystallized badly....

I tried a slower, slightly higher bisque. This had no noticeable effect either. One problem I have, my Studio is in a rural area, and our electric current fluctuates. We are supposed to have 'time of use' pricing, that is, hydro is supposed to be cheaper during the off-peak hours. I have tried firing at night, but have found that the firings take longer so I'm not sure I'm ahead at all. I've tried to talk to my hydro supplier, but they don't talk to humans. Long story short, my bisque firings, all on the 'slow bisque' program my kiln has, vary between 8.5 and 14 hours. That's not particularly fast. Still, I tried a cone 05 firing to see if it made a difference, but it didn't seem to.

None of my glaze materials are new, and none are particularly old, or have gotten damp or frozen or any other such thing.

Yes, I have changed clay. But I changed clay months ago, and for three months there were no dots. No pinholes, no bubbles, no dots.

I really don't want to change to a completely new glaze. I could try my clear glaze with opacifier, but it doesn't take the colours nearly as well as my white one does.

And fire slower? How can I when the current fluctuates so much? I can program to my heart's content, but if the elements don't get the power they need, they are going to slow down. Glaze firings also vary a lot, everywhere from 6.8 hours to 12.6. I log every firing, so I know.

So what to do? Well, I tried two things in the latest load: a batch of glaze with 3% more frit 3134, and a batch with 2% less Superpax.  I dipped a mug, new clay, slow-bisqued to cone 06, in each, plus one in the large glaze batch in the tub. 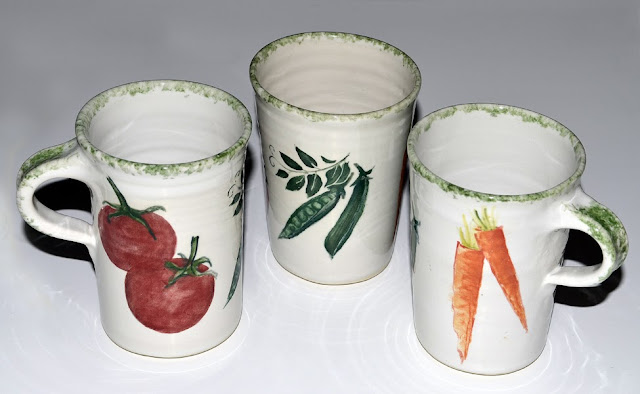 Here is the result. They were all on the same shelf in a well-loaded but not tight, kiln. The witness cone is nicely bent over, tip touching the little plate I put it on. The firing to cone 6 took 8.51 hours.

The left-hand mug, with the tomatoes, is the glaze in the large tub. The middle one, with the peas showing, is the low Superpax version (it is slightly less white), and the carrots are the higher frit version.

Boy, am I confused now.

Well, guess I'll go drive the garbage out to the road for tomorrow's collection - they come so darn early I have to do it the night before and hope the critters don't get into it, ravens or racoons or skunks or the neighbour's dog - and let my subconscious work on the problem overnight.