What a week! I'm just racking up the Personal Victories here, right, left and centre!

First, my garbage got picked up yesterday! Don't laugh, these days getting rid of your garbage is not that easy. We only get garbage garbage picked up every second week... the alternate week they pick up paper re-cycling and compost. Cans and bottles go the same week as garbage. Since I don't have much garbage, I tend to only put it out every 4 to 6 weeks, and of course I get totally confused. When I got to the road Sunday night I noticed my neighbour had his compost bin out. So I turned around and drove home (my driveway is l-o-o-o-n-g) and checked my calender. Still looked like garbage week to me so I put my 3 bags out. It worked! Garbage is gone! Yahoo!

Garbage is so complicated these days my husband threw up his hands and quit. He hasn't thrown anything out since 1976.

Then today I managed to cancel the insurance on the car we haven't had for more than a month! I thought it would be simple, but it took a number of phone calls, waiting for the right person, discussion, negotiation, deliberation, looking up of rates etc etc until I really felt I should just forget about it and let them insure it in perpetuity. But we got 'er done, folks! And with all the nifty deals and discounts my agent was able to get for me, it will cost hardly any more to insure my truck now than it used to cost to insure both it and its late stablemate.

I never did understand economics, but I used to understand insurance. Not anymore.

I'm delighted to report that I did not leave the portable phone outside in the rain yesterday! Alright, so maybe I did, but it was under an old pail and didn't get wet. That counts, right?

My phone handsets have a rough history. I take them along with me while I'm gardening and stuff happens. I'm pretty sure at least one got planted, and one got carried away by an enemy critter. I found it years later in the woods in a place where I have never gardened, so I don't think I should be blamed. They should sell replacement handsets, really.

And the laundry is almost done... ha, take that, underwear! No doubt you, Dear Reader, do yours on a reasonable schedule, but I operate on the 'wait until you have absolutely nothing left to wear' system. Then I do several loads in a big hurry and forget all about laundry until next time... today I did some work in the Studio, dashed into the house to move the wet into the dryer and re-load the washer, did some work in the Herb Garden, dashed into the house to move the laundry on one step, went out on an errand, came back and dashed into the house... you get the idea. In between I searched for the phone and had an earnest discussion with my insurance agent... maybe the laundry basket should 'ping' like my oven does.

If I won a lottery, I'd buy enough clothes to last a year, and would throw them out as I went along; wait, would that work? Are t-shirts and jeans garbage, re-cycling or compost? And I wonder if I could get insurance on my phones, then I could put one in the garbage bag and phone the road and if the ravens answer maybe they could sort out the whole compost/re-cycling/insurance thing for me... After all, they are garbage experts.

And it's only Tuesday.

Getting Ready for the Carp Market

Busy day! Got up early and threw some bowls - need to fill a kiln and need bowls... think I can get them done by next Saturday? The Carp Farmers' Market opens next Saturday, May 9 and I'm getting all kinds of good stuff ready.

Then I went off to the Market to get my booth ready. Spent 4 hours painting my furniture! Painted the shelves, the tables, even the chairs. Chairs are a beast to paint, and wicker chairs are the beastiest. I found out that the paint roller does a pretty good job; who knew. Of course there were still all the legs, edges and trim to do with the brush. It was a bit cramped working in my booth and I kept bumping the wet paint. I was nicely decorated when I got home!

Any alert reader who would like to hazard a guess as to the new colour, leave me a comment or zip me an email and if you are right I'll give you a free mug! (Course, you'll have to come to the Market to get it!)

I hope there is asparagus at the Market on Saturday. I've made some serving dishes, and sauce jugs, for serving asparagus in its various guises. Did you know you can roast it? Just sprinkle some olive oil over, add a pinch of coarse salt, and roast for about 15 minutes. Leave it a bit crunchy. Yum! 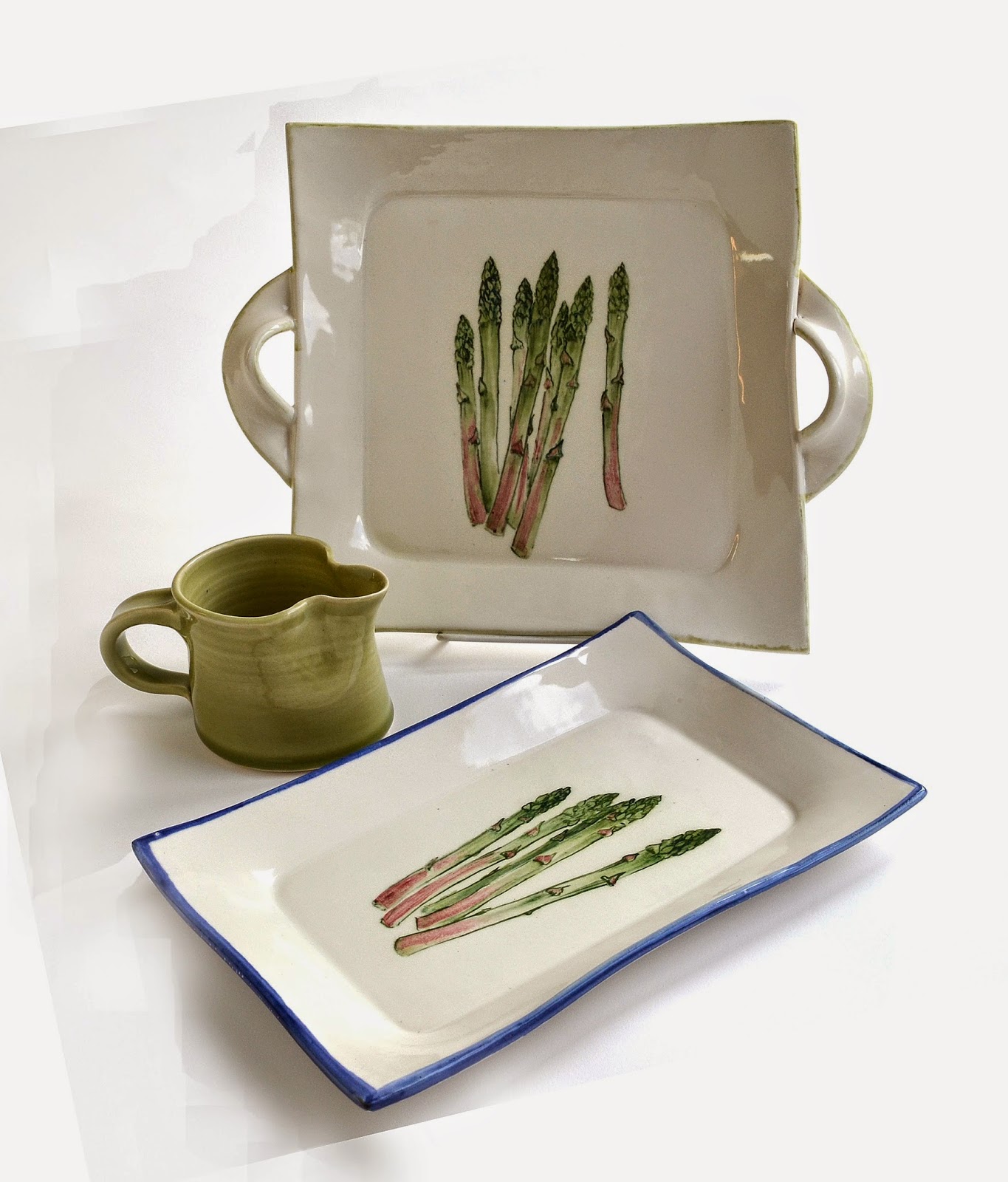 Hint: Your Mother needs a nice dish to serve asparagus on, and it is Mother's Day on Sunday May 10!
Posted by Lis at 6:02 PM No comments: