Made a nice batch of butter dishes. I glazed them in solid colours, except for the 'Bird' design ones - some pale green, some yellow, some turquoise, some medium blue, some deep indigo blue. I played with the handles and made strap handles, bird handles, loopy handles.... striped and dotted ones. Lots of fun!

Taking the photo to show one of them on my Facebook page (Pine Ridge Studio is on Facebook) was difficult. I just couldn't get it to look like much. Luckily my friend Janice happened by with a lovely gift of ripe tomatoes from her garden and I grabbed her. Her painter's eye quickly zeroed in on using the darker areas of the image to create a dynamic composition. 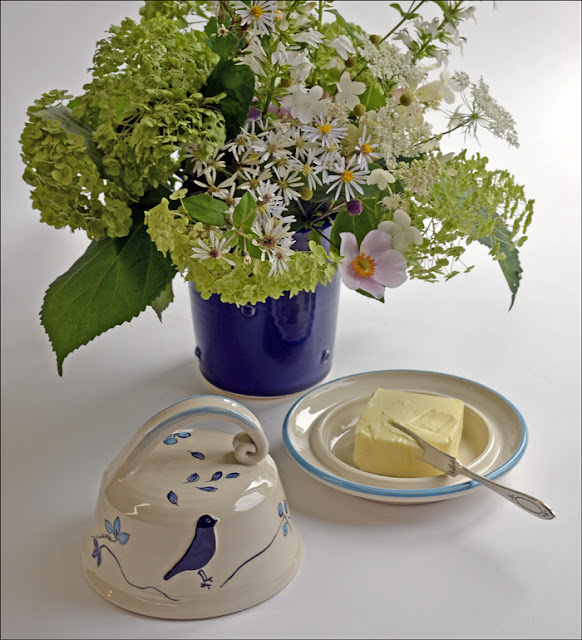 Notice the neat triangle made by the bird, the dark vase, and the butter knife. Thank you, Janice!

Now, just don't ask me why flowers because I don't know. I just thought they would look fresh with the butter and I think of breakfast, which is when I like butter on my toast, as a fresh time of day.

Well, it's back to square one, folks.

A longer, slower bisque firing had no effect. I didn't think it would. How can stuff that is supposed to burn out at cone 06 affect things at cone 6? Unless my brain is slipping a gear, I can't see the connection. Anyway, it didn't make any difference. Dots and more dots....

Unless it is something really subtle about the firing (the glaze firing, that is), I guess it is the clay. Maybe the first batch of the clay I got to test  - remember, I switched clay bodies to try to get away from the problem of teapots cracking after a year or two of use - was not the same as this clay now. Every batch is a wee bit different, I am thinking. I am sure there was no problem with dots when I decided to make the switch. I would have noticed at once.

So now I am trying two things: a bunch of things thrown using the old clay and glazed in the current batch of glaze, and some in the new clay using slightly different versions of the glaze. Maybe a version with slightly more frit will melt a bit more and the dots either won't form or will heal over at temperature. Or a version with slightly less opacifier might not form dots. I tested both of those ideas a week ago and got no dots on either, but I didn't think it likely both ideas would have worked, so decided to discount those tests. Maybe I was too quick about that.

Come to think of it, I should try a small batch of this glaze with no opacifier and see if it gets dots. I'll go do that right now, a glaze firing is coming up in the next day or two so I'll go and get it ready. Put it on both clays and see what happens.

One thing that makes this problem frustrating is the lack of information on it. Every reference to 'dots' that I have found so far just says that they are a known issue in maiolica work, but suggestions on how to fix the problem are scarce. Basically, 'use a different glaze' and 'use a different clay' and 'use a different technique' and 'just accept it' are about it for suggestions..... like I said, square one.
Posted by Lis at 9:20 AM No comments: