Not impressed? But I did it using only 9 fingers! A couple of days ago I was changing the die on my jolleying machine and hit the 2nd knuckle on my left index finger when the wrench slipped. It didn't hurt as much as I expected given the whack I gave it, but by evening it was most impressively swollen. I couldn't bend my finger at all. The next morning it was still very swollen and a lovely shade of red. It reminded me of the time about 10 years ago that I dropped a rather large rock on my right thumb. Don't ask exactly how I did this, because I never did figure that out. The point was that the long bone in my right thumb was cracked along its length. A torsion fracture, the doctor said. He insisted on a cast, saying that without it I might end up with crippling arthritis in the thumb. They put an odd sort of cast on, not the metal tube thing you see sometimes. It ended up looking a lot like a tiny barbell, fat at both ends with a thin part in between.

Throwing with the cast on my thumb was interesting. Turns out you need your right thumb to flatten inside the bases of things. The cast, except for really small inside bases, worked very well. At first I was careful to put the rubbery cover thing over the cast to keep it dry and clean, but after a while I forgot about that. When I went to get it off the technician said he had never had anyone wear out a cast before!

So this morning I tried throwing without using my left index finger and it worked fine. A bit awkward but do-able. Here are some of the plates I made on the jolley: 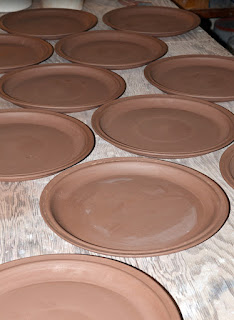 I'd show you a picture of my finger, now nice and green, but nah, look at the mugs instead. 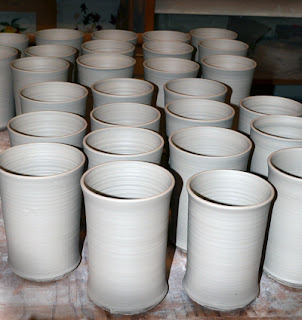 Well, maybe not the greatest mug bodies I've ever made, but then I made them with only 9/10ths of my fingers!