I've been working on making some pieces with hearts instead of birds stuck on. Here's a picture of a small group of them: 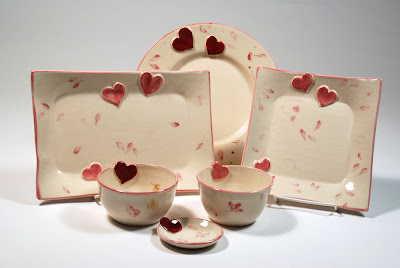 I made these for the Blackbird shop in Almonte. I figured with Valentine's Day approaching, I could indulge my liking for hearts!

I also made more Bird pieces, including a salad set I rather like. It's not easy to design a series of pieces that work together as a 'line'. I want the shapes to be consistent and the design to work on the different items. In this case, the birds work fine on the flat pieces and the open pieces but I'm darned if I can see how to use them on, say, a teapot or a sugar bowl! Maybe inspiration will strike one of these days.... 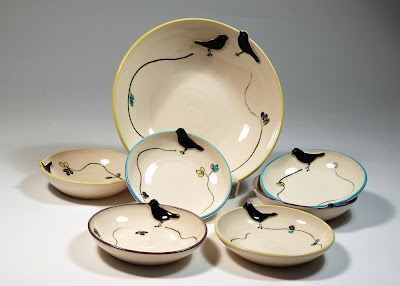 Everything was ready last Wednesday, but delivering them was another story. First I realized that Thursday morning was my eye doctor appointment. I have been waiting close to three months for this, having broken my glasses back in October, so I wasn't about to miss that. Unfortunately, in the morning there was freezing rain with snow forecast. Since I hate being late for things, I left the house early and thank goodness I did because the roads were dreadful. What would usually be a 35 minute drive took over an hour. My new 'specs will be ready tomorrow or Friday, hurray! (No more going out in public with glasses held together with that old white adhesive tape. A young fellow at the eye doctor's, also waiting, told me how he and his brothers so often had to tape their glasses like that when they were young. I tried to suggest to the waiting room that white tape was a new fashion accessory but I don't think anybody was buying it.)
Thursday afternoon it was just too icy to venture out again.

Friday morning it snowed and snowed..... but I thought I'd try it and of course got the truck totally stuck. I was doing quite well, out of my parking spot and starting down the driveway, and then, in a blink, slid sideways off the driveway into a foot of icy white stuff.

Saturday it took an hour of shoveling and the door mat pushed under the spinning tire to get out.