On the whole, the red and bright orange stains we have available to us these days are a real boon. For those of us who like to paint flowers on our pots, they are especially useful as many flowers have small red areas..... and then of course there are the completely red flowers. Columbine, or Aquilegia canadensis, is one of them. When I was asked to make some mugs decorated with a Columbine design I figured one of the new reds would be perfect. These stains, which are called 'micro-encapsulated' and use selenium and cadmium compounds, are supposed to be food-safe 'when fired correctly' but since I don't really know how I can be sure of that, I'll restrict them to the outsides of things for now. Still, people often ask for red designs on the outsides of bowls and mugs and I thought I'd accept the challenge.

But my first set of mugs were rather washed out. I didn't have the red stain on thickly enough. I found when I was painting the flowers (and I paint on top of the raw glaze because my glaze is opaque white) that it was hard to brush on a second coat as this made the first coat curl up and peel off. I fixed that set of mugs by over-painting them with china paints, which, by the way, can save your life in situations like this.

The second set of mugs, I thought I'd try painting them, then re-bisque-ing, then adding another coat of red, before glaze firing to Cone 6. Here's what happened: 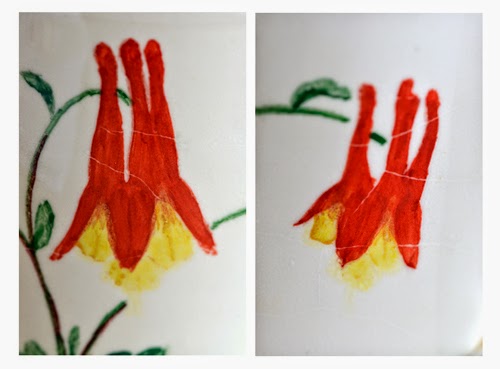 I guess the glaze coat, fired only to Cone 06, cracked and it became obvious in the later firing. Luckily, I also had another test in the same glaze load, where I brushed on a double coat of red without letting it dry in between. That is, I brushed on one coat and then immediately a second coat. Seemed to work, at least the stain didn't curl up and fall off but I needed to see the finished piece to be sure it would work. 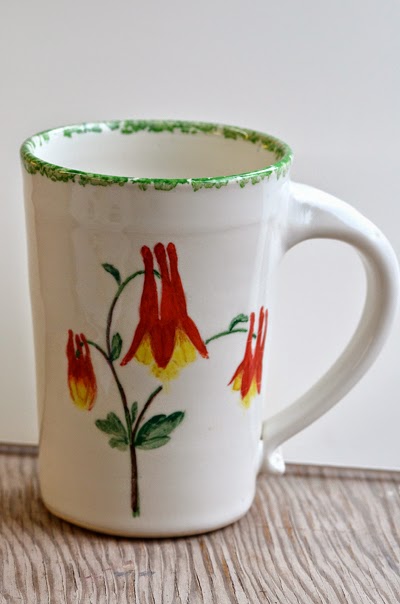 A big relief, and now when someone asks me for red, I don't have to roll my eyes (mentally, of course, not physically) and make apologies. Now, how to explain that they can only have the red on the outsides of things....
Posted by Lis at 5:44 PM