Doesn't that sound intriguing? I was certainly intrigued when I heard that Catherine Gutsche, a local artist, who was coming to my Clay Day, was going to make something combining clay and felt. I just couldn't see how the two could come together! (Except as a muddy mess..... but I was sure that wasn't what she had in mind!)

I'll let Catherine tell about it in her own words:

"Why do children get all the Play Dates? It's just not fair. That is the reason artists make a point to invite other artists to their studios for Play Dates. It's our version of the coffee klatch in the cubicle world. We like our worlds but occasionally we too need the company of other like minded folk.


It was for this reason that artist/potter Lis Allison extended her Pottery Play Date invitation to the artists in the West Carleton Arts Society group. When I got her email I was so excited. I’ve had this crazy idea cooking in my head with no way to execute it until then.


Over two weekends Lis hosted a small group of artists in her rural pottery studio. She quickly gave us a basic intro to pottery and then let us free in her workspace. She guided us individually and expertly answered questions that flew at her from left and right. We each embarked on our individual projects with coffee and conversation flowing.

I described my project to Lis and we both agreed that I wasn’t really 100% sure how I was going to execute the final product. But that’s often how I work, I have a picture in my head and a pretty fuzzy plan that often takes a few twists and turns until I settle on my final outcome. Being a mixed media artist, my plan was to join pottery and felt into one piece. How they were to join was a developing theory. And here is the resulting fusion of pottery and felt: 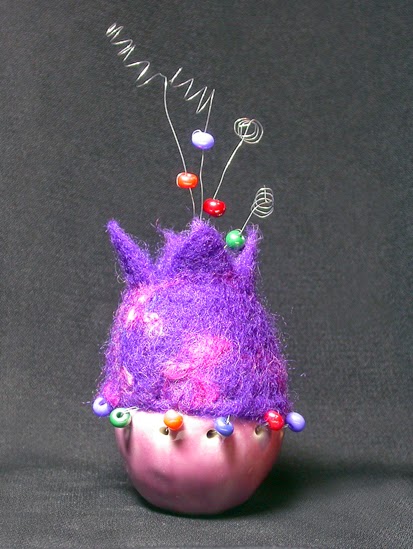 Wow! I'm totally impressed! What Catherine did was, she made a small bowl with a row of holes around the top edge. Then she felted the 'hat' and added the beads and wire and sewed the felted bit to the pottery bit. Voila, a nifty little object to make you smile every time you see it. Can't you just imagine one on your desk or on top of your computer or on the shelf near your art supplies?

I hope she makes lots more! And thank you for telling us about it, Catherine. By the way, I have lots more clay.....